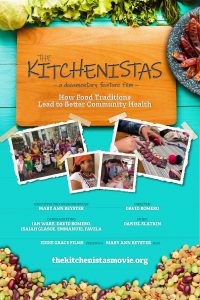 “The Kitchenistas” is a full-length documentary film created by filmmakers Executive Producer/Producer Mary Ann Beyster and Director David Romero. The film is about women advocating for healthy food traditions to change communities and transform lives. Olivewood’s Cooking for Salud® program began as a 7-week nutrition program for women seeking healthier diets, and has transformed into an 8-week program that feeds into the Olivewood Kitchenistas program – a Latina-led movement to raise the health, wellbeing, and resilience of the community.

As a result of systemic inequities, National City has one of the highest rates of obesity and diabetes in San Diego County and in the state of California, and the Cooking for Salud graduates,  “Kitchenistas”, are out to change that.

By the end of 2020, there are more than 275 Kitchenistas and a 1-year plus waiting list. The Kitchenistas are community builders, teaching healthy food traditions and advocating for high-quality food in their homes, schools, city, and beyond.

The feature film is an expansion of the award-winning short film, The Kitchenistas of National City, that aired on PBS/public TV stations for four years starting in 2016.

The feature film follows the 16th Generation through the now, 8-week course and focuses on the personal journeys of several early-generation Kitchenistas from mid-2019 through 2020.

The Kitchenistas of National City

Learn More About the Film

Watch the Film or Request a Screening